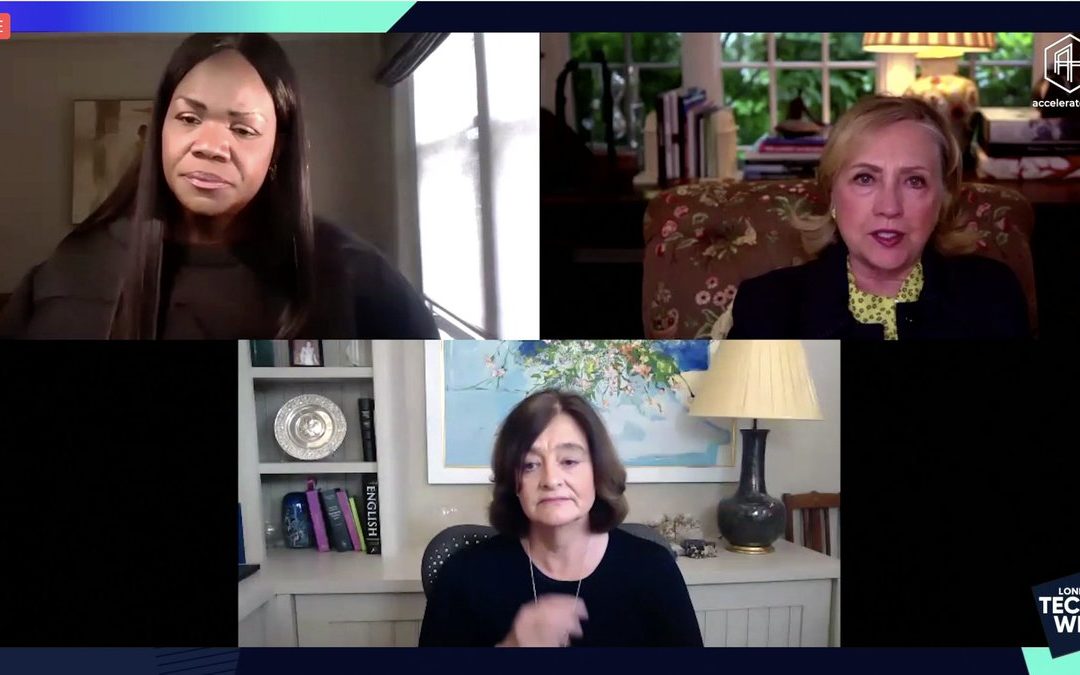 Next 100 Years was over the moon to have been the supporting partner for last week’s  very special discussion on ‘The State of the World for Women’ featuring none other than Secretary Hillary Clinton, Cherie Blair CBE QC and Dame Vivian Hunt, Managing Partner of McKinsey UK&I. The event, streamed live across the world, was part of London Tech Week and hosted by AcclerateHER, an organisation which focuses on addressing the underrepresentation of women in tech. We, of course, were particularly excited by the fact that both Secretary Clinton and Cherie Blair are former women lawyers!

With a topic like ‘The State of the World for Women’, the three trailblazers naturally grappled with the recent protests in the US, the Covid-19 crisis and how these events are impacting equality and women. Importantly, they also advocated for how we can move forward to build a fairer future out of these turbulent times. Here are ten vital lessons we took away from their discussion:

1. We are at a turning point in recognising racial prejudice and privilege

Secretary Clinton: “We are also hopefully seeing a turning point in recognising bias and the role that it plays in people’s lives. Despite many of us being unwilling to recognise or admit that.”

The conversation started with a recognition of the acts of police brutality in the US, which set into motion waves of protest that reverberated around the world. As well as reforms in law enforcement and the judicial system, Secretary Clinton highlighted that one of the key effects is a major change in society’s recognition of racial prejudice – not just in the US but around the world. Cherie Blair also highlights the importance of recognising her own privilege as a white person and questioning the inherent assumptions that go along with it.

2. Neutral is not neutral

Along with recognising white privilege, Cherie underscored the importance of going beyond this and actually accepting the responsibility that this entails. Similarly, Dame Vivian drove home the point that, in a world where inequality is currently the default, neutral is not neutral. You need to be actively working to dismantle inequality, if not, you are complicit in it. This applies to race, gender and other forms of inequality.

However, Dame Vivian is hopeful that this shift, in recognising that neutral is not neutral, both individually and in business, will be a major positive change coming out of this moment.

3. We all benefit, socially and economically, from equality

Secretary Clinton: “We also have to do a better job of making the case that progress, advancement in human rights and women’s rights and civil rights is not a zero sum game…”

Secretary Clinton points out that progress for one group of people, whether that is ensuring that they have the healthcare or the economic opportunities they deserve, will not take away from those who already have that access or those opportunities.

Cherie Blair gives an important example to illustrate this, pointing to McKinsey’s analysis which shows that trillions of dollars could be added to the global economy if women were given equal economic opportunities.

4. We’ve got to stand up for evidence-based thinking

Secretary Clinton: “So we’ve got to stand up for science, facts and evidence if we expect to move the agenda forward.”

This leads naturally to the next point. Hillary emphasises how evidence-based thinking has taken a major hit of late, particularly as illustrated by the US and UK governments’ approaches to handling the Covid-19 pandemic. Data can reveal how social and economic changes are playing out and inform our approaches to dealing with them, and ensuring inequality is not allowed to worsen. It also helps to advance the case for lesson 3, above.

5. Technology is an invaluable tool to address inequality

Secretary Clinton: “…advances in technology connect you around the world, give you an opportunity to be more entrepreneurial, more philanthropic…”

Technology emerged as a key enabler of progress throughout the discussion, from McKinsey’s technology-driven training for women entrepreneurs, empowering them to succeed in their new business endeavours, to the free digital courses Cherie Blair’s Foundation is using to help women-run businesses cope with the current economic uncertainty. The speakers even received a question from Tania Boler, founder of Elvie, which makes discreet breast pumps enabling women to feed their children much more conveniently, whether commuting, in the office or working from home.

6. Women are bearing the brunt of the pandemic’s work & economic impacts

Secretary Clinton reminded us that Covid-19 is doing the most harm to women when it comes to jobs and economic fallout, as we have put a high burden on the backs of mothers and caregivers. On top of this, in the US, most of those who have lost their jobs in low paying service sector work have been women and a higher percentage of unemployed are now women.

7. A concerted effort is required to ensure progress in gender equality is not lost

Cherie Blair: “Women are already behind and if we do not make specific provision to make sure they don’t fall further behind, it’s not good enough…Inclusion & diversity has been falling down the agenda and we have to keep it up on the agenda”

On the basis of this disproportionate burden, Secretary Clinton urges business and government to step in. Business, for example, must make sure that women can continue working remotely and must be sensitive to their disproportionately higher childcare burdens. Cherie Blair agrees and demands that firms do not let inclusion and diversity fall behind. We have already seen losses in our hardwon progress in this area and must ensure that both diversity and gender equality are a top priority moving forward if we want to avoid further regression.

8. Mentors, sponsors and friends are important – and they can all be the same person!

Cherie Blair: “Hillary was so amazing to me”

Dame Vivian discussed the importance of mentors, sponsors and friends, from whom a ‘quiet word’ can make all the difference. Cherie Blair talked about the invaluable advice Secretary Clinton gave her when she moved into 10 Downing Street while Secretary Clinton herself talks about the awe she felt at seeing Cherie do the unprecedented by continuing her career when her husband became Prime Minister.

9. Diversity is about intersectionality

Secretary Clinton: “You are an amalgam of your identities.”

Secretary Clinton urges us not to try to split off individuals’ pieces of their identity and address these separately, as this does a real disservice to them and to the larger cause of diversity. We must acknowledge people’s multifaceted identities and tell enough stories that capture all of these permutations.

10. Advice for the young women out there

To wrap up, Secretary Hillary Clinton and Cherie Blair QC gave us two key pieces of advice which we will make sure not to forget…

Cherie Blair: you are not going to be able to please all the people all of the time…you’ve just got to be true to yourself and stick to your convictions’