An interview with Priscilla Osoba, winner of our Under-35 Lawyer of the Year Award 2019 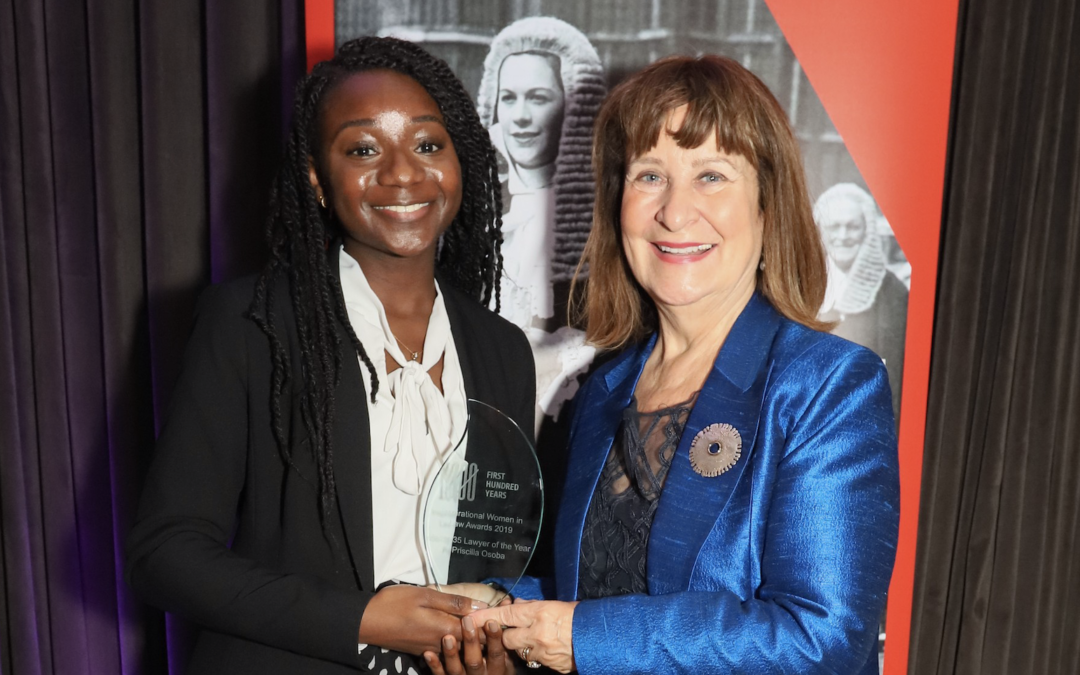 We were delighted to chat to Priscilla Osoba, Solicitor at Burges Salmon and winner of the Under-35 Lawyer of the Year Award at our Inspirational Women in Law Awards 2019. We catch up with her,  now she is a judge for this year’s Awards, to find out what she’s been up to, what advice she would share with aspiring lawyers and what we can all learn from Beyoncé.

Q: Last year, you were the well-deserved recipient of our Inspirational Woman in Law, Under-35 Lawyer of the Year Award. At the time you were a second year Trainee Solicitor at Burges Salmon and were leading initiatives on the firm’s BAME network, BCultured, as a member of its management committee.

What are you up to now and what does the future hold for you?

A: I have now qualified into Burges Salmon’s Projects team so am doing work in a range of areas – transport, procurement, environment and energy. It’s a great team and I enjoy the variety of work on offer.

BCultured is still going strong, and we have been producing content on the topic of allyship in the context of the Black Lives Matter movement. We gave a firm wide webinar talking about allyship for anti-racism, which was really well received and has led to people having interesting discussions with their families and friends outside of work. We will be doing the webinar again for a wider audience, in association with the Bristol Law Society, so I am looking forward to that.

Going forward, I hope I am able to maintain a good balance of “work” work and BCultured work, because I really enjoy both, and I think the importance of the work BCultured is doing has really come to the fore this year.

Q: There has been a renewed emphasis this year from across the legal profession on making real improvements when it comes to diversity and inclusion. In your view, what shows that a firm or organisation is taking this seriously and is committed to meaningful change?

A: I think the lack of diversity at senior levels is a common issue even in firms that do care about improving diversity and inclusion, so looking at new recruits and retention rates of people from diverse backgrounds is a better way to gauge whether a firm practises what it is preaching. Many firms signed up to Rare Recruitment’s Race Fairness Commitment following the Black Lives Matter protests this summer, and as part of that they’ve committed to monitoring application to interview rates, promotion rates and ethnicity stay gap rates, with a view to publishing them annually. This should help to keep them accountable on their promises to promote racial justice.

Speaking to people who work at these firms and have experienced the culture there is another great way to find out how seriously an organisation is taking the issue.

Q: What first drew you to the law and how has your experience been of it so far?

A: People often joke that when you’re from a West African family your career options are doctor, lawyer, engineer or failure. Thankfully, my parents never forced me into anything, but I enjoyed reading, writing and arguing more than I enjoyed maths and science as a child, so thought it would be a good option for me. I also had some lawyers in my family so it seemed very attainable. I was very nerdy and would go to my local magistrate’s court during my free periods in sixth form, to watch the court in session. After doing some work experience in a criminal law firm I decided that criminal law was not for me, and started looking into the corporate/commercial firms when I started university.

I really enjoy that sometimes I am able to get stuck into a really technical piece of black letter law, and at other times the work is more commercial with little law involved at all. I just wonder how long it takes to feel like an expert in something!

“When I was in primary school we had a Chinese proverb on the wall that said ‘he who asks a question may be a fool for five minutes; he who asks no questions stays a fool forever.’”

Q: How important have role models been to you and do you have any particular role models that have inspired you in your life and career?

A: My grandad, Saki Scheck, has been one of my biggest inspirations. He was a lawyer and politician who campaigned for Ghana’s independence from British colonial rule. I really admire that he was actively committed to such an important cause. It was also invaluable having him as a visible role model. Before I really understood all the barriers that I ‘should’ face as a Black woman from a working class background, I knew that my grandad was an Oxford-educated lawyer, and someone who helped to bring about real change. That’s not to say that he didn’t face any challenges, and that is something I wish I had got to speak to him about before he passed, but I think knowing that he achieved those things made me believe that I could too if I wanted to.

I am also very inspired by Beyoncé because she is at the top of her game, and while she’s undoubtedly talented, she exemplifies what is possible when talent meets hard work and discipline. I may not have Beyoncé’s talent, but I am definitely taking notes from her on hard work and discipline! I also love that she is all about empowering other women, instead of competing with them.

Q: What is the most valuable lesson you can share with young, aspiring lawyers?

A: That there are no stupid questions. There may be a right or wrong time to ask, but if you are ever unsure about anything it’s always worth finding someone you feel comfortable asking. Whether they are questions about getting into law, or questions on a specific task once you’re practising law – people tend to appreciate being asked. When I was in primary school we had a Chinese proverb on the wall that said “he who asks a question may be a fool for five minutes; he who asks no questions stays a fool forever.” This is something I am still working on as I find that I learn by doing, so sometimes I don’t have any questions until I’ve actually started a task, if at all.

I also find it comforting to remember that everyone more senior than you has been where you are at some point and navigated it successfully. If they can do it, so can you.