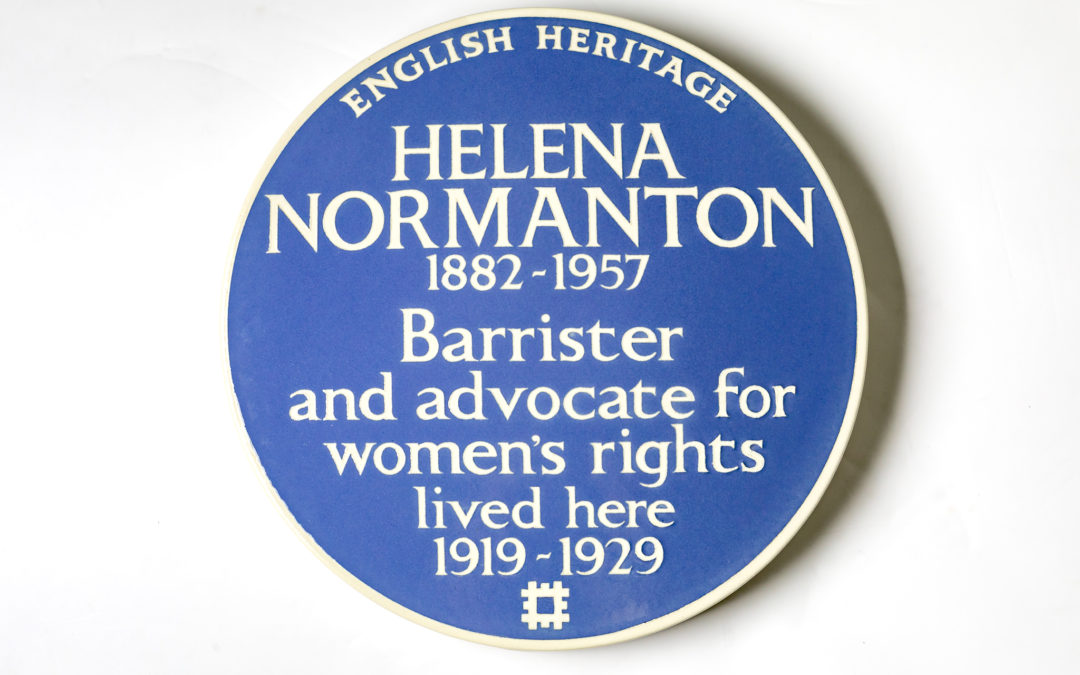 An English Heritage Blue Plaque now commemorates the life and legacy of barrister Helena Normanton, a leading campaigner for women’s rights particularly for social and financial autonomy and equality barriers within the legal profession in her time. Achieving an incredible series of ‘firsts’ as a woman practitioner throughout the course of her career, Helena Normanton was the first to be admitted to an Inn of Court, to practice at the Bar of England and Wales, to appear in the High Court and in the Old Bailey, and in 1949, she was one of the first two women to take silk.

On Wednesday 20 October 2021, in an afternoon ceremony held at Helena Normanton’s former home at 22 Mecklenburgh Square, one block north of Doughty Street Chambers, the Blue Plaque was unveiled by Lady Brenda Hale, Baroness of Richmond, herself a longstanding champion of diversity in the judicial system, and the first female justice and President of the Supreme Court among many other ‘firsts’ she has achieved in her distinguished career to date. Guests at the unveiling ceremony included relatives of Helena Normanton and senior members of the judiciary, and all guests were subsequently welcomed to a celebratory reception at Doughty Street Chambers, jointly hosted by the Doughty Street Women and First 100 Years.

Born in 1882, Helena Normanton was a leading campaigner for women’s rights, particularly within marriage and in the legal profession. Despite a lifelong dream to work as a lawyer Helena began her working life as a school teacher, since the legal professions were at that time closed to women. Helena fought alongside other women to remove these bars, including by litigating for her own membership of Middle Temple, unsuccessfully. After the passage of the Sex Disqualification (Removal) Act 1919 Helena became the first woman to join one of the Inns of Court, in December 1919. In 1922 she became the second woman called to the bar of England and Wales, but she was the first to set up practice as a barrister and to appear in the High Court. In 1949 she became one of the two first women to take silk in England and Wales, becoming King’s Counsel.

During the early years of her practice Helena lived at 20 Mecklenburgh Square, Bloomsbury, next to Doughty Street.

Both professionally and personally Helena also fought for women to be accorded equal treatment in the home. She fought for divorce and inheritance law reforms. She proudly created a stir by continuing to use her own name throughout her life and in her work, despite having married, and is thought to have been the first married woman to have been issued a UK passport other than in her husband’s name.

Responding to the news, Megan Hirst, of Doughty Street Chambers, said: “In 2018, we learned that the first woman to practice at the Bar of England and Wales, Helena Normanton, had started her professional life as a junior female barrister at Mecklenburgh Square, about 250 metres from our Chambers on Doughty Street.  Helena was a pioneer in the legal world, but she also fought for women’s rights to vote and to have autonomy in their financial and personal lives. We’re proud that Doughty Street Women could be a part of having a local feminist icon recognised with a Blue Plaque. We hope it will help make her name, her work and her inspirational life more widely known.”

Caoilfhionn Gallagher QC, of Doughty Street Chambers, said: “Helena Normanton’s achievements      would be impressive today, but in her time they were truly incredible. She was the first woman admitted to an Inn of Court, the first woman to practice at the Bar of England and Wales, the first woman to appear in the High Court, the first woman to appear in the Old Bailey, and in 1949 she became one of the first two women to take silk. The Blue Plaque scheme currently recognises far too few women – just 15% of the list – although English Heritage are taking active steps to change this gender imbalance. We are delighted that Helena Normanton has now, rightly, been honoured on the London streets where she started her remarkable, groundbreaking career.”

Dana Denis-Smith, Founder of the First 100 Years project, said: “If there is one thing we have learnt from the project’s work, unearthing the untold stories of many women legal pioneers, it is just how powerful visible role models are to future generations. Helena Normanton KC was one such role model and we are thrilled that she is being recognised with a blue plaque. We hope the plaque will stir the curiosity of passers by, both men and women, who will look to learn even more about the important contribution she made to the legal world.”

Dr Judith Bourne, author of ‘Helena Normanton and the Opening of the Bar to Women’ (Waterside Press, 2016), said: “Helena Normanton fought for women’s admission to the legal profession.  Forging a path for later generations of women lawyers to follow became the purpose of her life.  Her tenacity and resilience should inspire anyone who feels like an ‘outsider’.  She was a real woman who has become a feminist icon of the twentieth century.  Her Blue Plaque is both a celebration and a reminder of this woman’s great life.”