Ruth Bader Ginsburg: A beacon to women in law everywhere 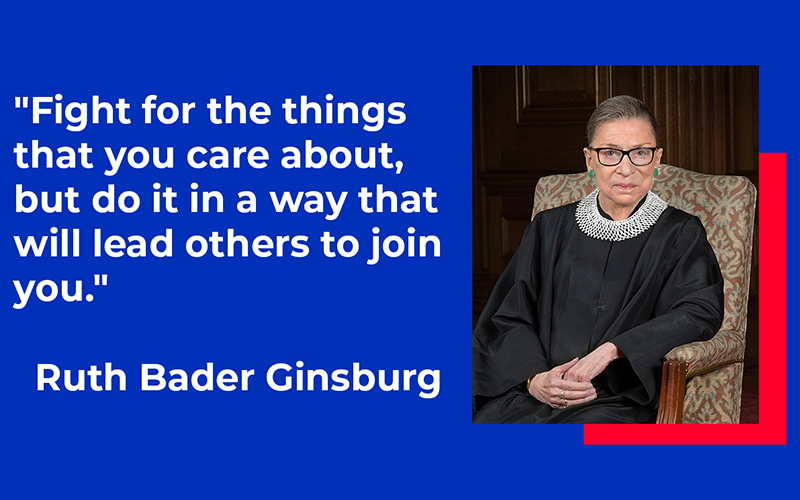 We look at the powerful role the great Ruth Bader Ginsburg played in inspiring women in law around the world and why trailblazers like her can have such an important impact. We also hear Baroness Hale, Lady Arden, Dana Denis-Smith and Anna Midgley’s reflections on the pioneering judge.

Justice Ruth Bader Ginsburg played a powerful role in shaping equal rights in the United States, both as a Supreme Court Justice and as a lawyer who litigated, and won, several defining sex discrimination cases. However, her championing of equality and her trailblazing path as a woman in the legal profession produced an even more widespread effect, one which reaches beyond the borders of her jurisdiction and across the world.

Justice Ginsburg and her remarkable career have inspired waves of women lawyers in different countries, including the UK, to take their place in a profession that has justice at its heart. To find a prominent example of someone inspired by ‘The Notorious RBG’ you need look no further than the woman who reached the very top of our judiciary: Baroness Hale.

Writing in The Times today, Baroness Hale shared that Justice Ginsburg’s “uncompromising view that “women are equal to everything” inspired my own career — and my motto — and that of countless other women in the Anglo-American legal world.”

Similarly, Justice Ginsburg has done much to guide our own work as a campaign celebrating women in law. As our founder Dana Denis-Smith wrote in the Solicitors Journal, “Ruth Bader Ginsburg has been an inspiration to me and many of those who have been involved in the First 100 Years and Next 100 Years projects…She belonged to a type of feminism that sought to use available means – like the law – to create deep and lasting change.”

It is perhaps fitting that Justice Ginsburg’s rise to the top of a male-dominated profession has in turn empowered women in law in other countries, since her own feminist views owe much to her time undertaking research in Sweden. She moved there to study civil procedure when she was unable to get a legal job in the US on account of being a woman, despite graduating joint top of her class at Columbia Law School.

In Sweden, she witnessed a more egalitarian society where women were able to pursue meaningful careers, including in the law, even while raising families. In interviews, she recalled watching a presiding judge delivering a judgment while 8 months pregnant – something that would be unheard of back home. This helped guide her views on the importance of breaking down traditional gender roles, as much for the benefit of men as for women.

Her advocacy in this area was a throughline for her entire career and, once she reached the Supreme Court, was not restricted to just her majority opinions. Justice Ginsburg took the opportunity to voice her views on decisions that stood in the way of equality through her powerful dissents, which themselves have proved enduring and inspiring. In the Ledbetter v Goodyear case, she famously railed against the all male majority and accused the justices of being indifferent to the gender pay gap. It is therefore no surprise that the children’s book about her life is named ‘I Dissent’. It is sure to inspire yet more generations of women lawyers.

Lady Arden, herself a role model owing to a pioneering career at the Bar and on the Bench, agrees and told us that, to her, “RBG was an inspiration, especially for her dissents, and in her company you could not fail to be impressed by her dignity, serenity and thoughtfulness.”

It is clear that Justice Ginsburg’s mark as a role model to women in law has been indelible, helping to create a more equal profession where female voices can increasingly be heard. This legacy, which is sure to continue through her enduring story, legal opinions and dissents is sure to continue to empower the next generation. In doing so, she reminds us of the importance of role models.

As Anna Midgley, one of the youngest women to be appointed a judge in this country, puts it: “Whatever struggles I have encountered as a woman in law, she overcame far greater hurdles at a time when societal expectations made it almost impossible for female lawyers to get off the ground. That thought, and gratitude for others like her who have broken down barriers for us, is immensely motivating.”